President Trump made an unannounced trip to Afghanistan on Thursday, his first as president, to visit troops for the Thanksgiving holiday. There, Trump said peace talks with the Taliban had resumed, speaking at a US air force base alongside Afghan president Ashraf Ghani.

Trump also said that the US will continue to reduce its troop commitment to the region, from 12,000 now to about 8,600, but would like to go lower without impacting operational duties. “We can go much further than that, but we’ll have it all covered,” Trump said.

According to Bloomberg, both Trump and Ghani said it was an honor to meet. Trump spent about 45 minutes in the building where they met, with press in the room for only a portion of it. In brief remarks to reporters during the bilateral session, Ghani noted that U.S. combat casualties have fallen under Trump’s presidency. Trump took office after the NATO mission in Afghanistan shifted to a training and advisory role.

Ghani thanked Trump for his leadership and called for a deal that won’t give too much power to the Taliban, saying Trump should not put “limits on the type of peace that will ensure the gains of the past year, and will ensure your security and our freedom.”

“Please thank your families for agreeing to miss you on this special occasion at home and for being here defending United States security and our freedom. Together, we will succeed,” Ghani told the soldiers. “We will never permit the repetition of 9/11 again. God bless you, God bless the president.”

Speaking to the US troops, Trump reiterated that they’re working for a peace deal in Afghanistan. “Rest assured that my administration will always be committed to annihilating terrorists wherever they appear,” he said, adding that he looked forward to the day “when we can bring each and every one of you home and safe to your family, and that day is coming and coming very soon.”

Trump’s remarks covered many of the same themes as his campaign events, including discussing highs in the stock market, the recent death of a top Islamic State leader and the role that a U.S. military dog, Conan, played in that mission. He recalled serving turkey earlier to troops, and missing out on his own meal.

“I had a bit of mashed potatoes and I never got to my turkey,” Trump told soldiers at the rally, saying he instead went to take photos with servicemen and -women. “I should have started with that, and not the mashed potatoes. I made a mistake.”

“We’ve spent $2.5 trillion since I’ve been here, that’s a lot of money that we’ve rebuilt our military. It was depleted as you know,” Trump told troops seated for dinner. “I want to thank you very much and I’ll be talking to you later but right now I want to have some turkey, OK? I’m going to join you for a little lunch.” 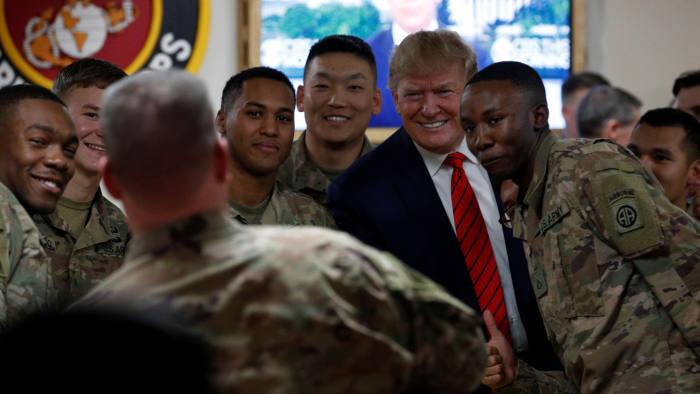 After speaking to the troops, Trump then toured the room speaking with soldiers, who loudly cheered his arrival. “Thank you all very much, what a great job you do, it’s an honor to be here – it’s a long flight,” he said after arriving, to laughter from soldiers. “But we love it.”

The surprise visit and announcement came two months after Trump abruptly halted peace negotiations with the Taliban in early September after accusing them of seeking “false leverage” through a terrorist attack that killed 12 people, including a member of the American military.

The US had been engaged in negotiations with the Taliban and planned to hold further talks with Taliban leaders and president Ghani at Camp David, the presidential retreat in Maryland, but following the terrorist incident the talks never happened.

Trump has long hoped to strike a deal with the Taliban, which would allow him to claim he has succeeded in ending the war in Afghanistan, something that eluded both George W Bush and Barack Obama, his predecessors in the Oval Office.