With Joe Biden’s 2020 aspirations melting like a Nazi who just opened the Ark, moderate Democrats who won’t vote for a socialist or are perhaps uncomfortable with ‘non-binary’ cabinet appointees are left with two choices; Pete Buttigieg or Michael Bloomberg. 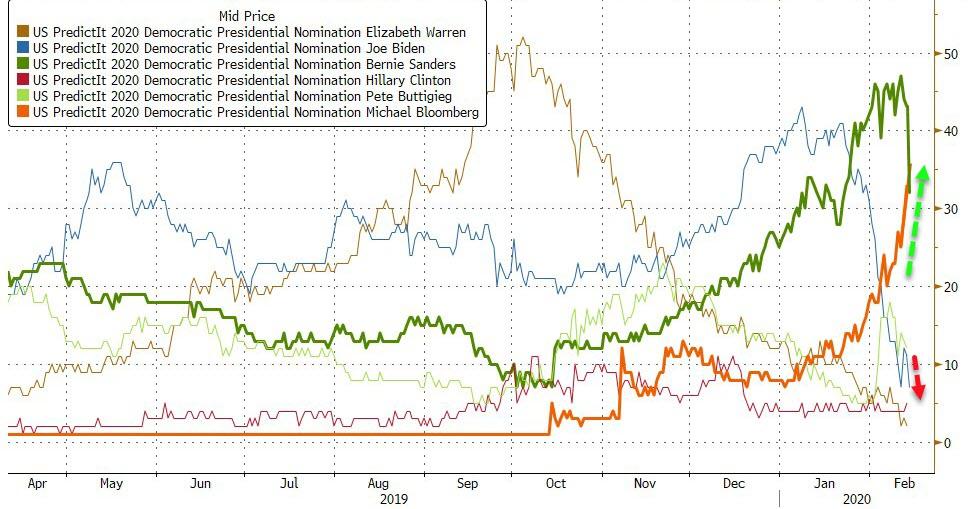 And based on the most recent odds from PredictIt, it looks like the former New York mayor may have to dust off his standing box for a showdown with President Trump.

Friends, nominations, and other things money can buy

How did Bloomberg, with his cardboard charisma and ‘Mr. Burns’ mannerisms, stage such a sudden and meteoric rise in the polls? Aside from Biden’s implosion leaving a giant moderate vacuum on the left, Bloomberg has been aggressively showering anyone within arm’s reach with buckets and buckets of money – so much that President Trump warned there would be revolution in the Democrat party if Bloomberg won the nomination.

“If a guy came in and bought the election, if he bought the Democratic nomination, I really think that you’d have a revolution within the Democrat party,” Trump told Giraldo Rivera on Thursday.

Explaining how Bloomberg is “using his fortune to fundamentally alter & manipulate U.S. politics to his personal advantage extends way beyond ads” is journalist Blake Zeff, who has “worked against” Bloomberg, “covered him as a journalist & worked with his top aides.”

But come on, it’s not like he can do that in *this* campaign. Sure he’s compiling a ton of random endorsements nationwide despite merely being a former mayor. But that’s because they loved his soda ban. Or his speaking style. Or…👇 3/17 https://t.co/vupRr0uMqp pic.twitter.com/ZSDzho8YD6

You may also see “community groups” back Mike's candidacy. As mayor, non-profits supported him when he reversed a voter referendum on term limits & made a backroom deal to help himself get a 3rd term. How’d that happen, you ask? He applied himself.👇 5/17 https://t.co/oISYWjWap4

Forget endorsements: This campaign has grassroots support! Mike held events in various states recently & got huge crowds. They were clearly inspired by that “Mike Will Get It Done” energy. But *this* probably didn’t hurt, either…👇 7/17 pic.twitter.com/CzWXR4MMVR

Mike's wealth even affects his rivals’ fundraising. Using his relationships with other rich donors, he’s personally asking them to sit the election out, so his rivals can't raise cash. Because having $61b to spend, versus $20mil for the other Dems, is too close for comfort 9/17 pic.twitter.com/7Nrl8lTmBY

OK, let’s discuss the non-stop ads. Saturating the airwaves gives you the huge advantage of never needing media coverage – which means rarely having to submit to interviews or scrutiny. If they want, they can make sure this👇 never happens again 11/17 https://t.co/7iwvPbrCNc

The issue’s not just that Mike’s ads help him “get his story out more.” It’s that they enable him to *craft* whatever story he wants, blast it to every voter 1000 times, & bypass the media. And if the story takes creative licenses, oh well. How will viewers ever find out? 13/17

For example, they know Mike has real vulnerabilities in the primary on issues & his GOP past. But they also know Dems hate Trump. So, that’s where the campaign turns all its focus. This achieves several things. First, makes him seem “above” the internal primary bickering. 15/17

No wonder Trump has been on the offense against ‘mini Mike.’